Having never manufactured any sort of amusement device before, I felt that the art, and artist, needed to be a selling point.  It couldn’t be just *any art* from *any artist*, it had to be iconic art from an iconic artist.  I wanted an artist who would be immediately recognized by not only their name, but by their unique style; someone with a solid pinball pedigree.

John Youssi (http://www.johnyoussi.com/pinball.html) fit the bill perfectly.  There was a slight problem however; I did not know John!  E-mailing a person of John’s stature in the pinball business and asking him if he would be interested in illustrating a pin game takes a bit of nerve, especially when you consider what games he has illustrated; Medieval Madness, The Addams Family, Whitewater, Whirlwind, Funhouse, Bride Of Pinbot, Twilight Zone, and Ripley’s Believe It Or Not, just to name a few.

The internet is a wonderful place.  I found John’s e-mail address on his web site and sent him a short note explaining what we were up to and asked him if he would consider joining the SGM team.  I was not surprised that he answered my e-mail, but I was surprised when he said he would be willing to come out and take a look at our project.  About a week later we were standing in front of the original Contact Master.  At this first meeting I honestly did not have much to show him.  This was very early on and we had only made a few 3D printed parts and not much else.  John was very gracious and listened to my pitch.  I suppose the whole project sounded just far enough *out there* that it peaked his interest.

We tossed around some basic ideas of what we thought the art should look like.  Being that the name ScoreGasm Master merits its own attention, I wanted the art to be pretty tame/classic, sort of a throwback to a bygone era.  John suggested an art-deco-meets-pinup-girl look.  This sounded like the perfect approach.

A few weeks later John e-mailed me with a few first drafts.  The art was near perfect from the start!  With only a few tweaks we soon had our cabinet and playfield art.

John is a consummate professional, so having him on board for the art package on this project made what could have been a grueling process very fluid and easy. 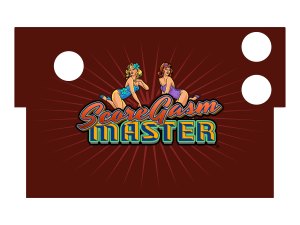